Nate Schmidt has been on a rollercoaster of emotions in the last 24 hours. Reports last night said he was heading to Florida. That was a lie and now we have an official destination for the talented defender. He is being shipped to Vancouver in exchange for a 3rd round pick in the 2022 NHL Draft. This is clearly a cap dump as Pietrangelo just signed a massive contract for the next seven years in Vegas.

Vegas trades Nate Schmidt to the Vancouver Canucks for a 3rd round draft pick in 2022.

Schmidt is a fan favorite in Vegas and it wasn’t taken lightly with the first trade last night for the fans. Now that it’s official, the grieving can continue. This move may cause some discomfort in the Knights’ locker room as a leader was just shipped out for almost nothing immediate for the team. What do you think of the move? After losing Tanev to Calgary and Stecher to Detroit, this is a great move for Vancouver to gain some skill on the blueline. 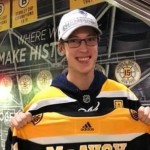