After the Leafs added defensemen T.J Brodie yesterday and found themselves over the cap, you knew a move was imminent. Tonight the Maple Leafs have traded forward Andreas Johnsson to the New Jersey Devils in exchange for 22-year-old forward Joey Anderson.  Anderson had 8 points in 34 games last season for the Devils. This trade was purely a salary cap dump. The Leafs will be just fine slotting Nick Robertson into his spot.

Leafs get Joey Anderson from NJ for Andreas Johnsson 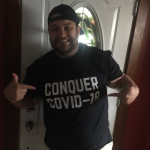