Lee Murray went from a notorious drug dealer on the streets of London to one of the most important rising stars in the world of mixed martial arts. Now, he is the mastermind behind one of the largest robberies in British history.

Murray was a case of massive wasted potential. A man who seemed to already have the world at his feet, Murray kept wanting more. The son of a Moroccan father and an English mother, Lee Murray grew up in Buttmarsh in Southeast London. Murray was gang-affiliated, violent, and heavily involved in drug entrepreneurship at an abnormally young age.

His father was an alcoholic with a short-temper. He was a quite domineering man who fought with his son frequently. At some point, Lee Murray began fighting back and his neighbor said that he saw a light bulb illuminate in Lee when he finally fought back. He turned on his father and knocked him out cold on his own front lawn. After a soon-to-follow extensive street fighting experience, Lee made his way into a real gym. The world of mixed martial arts awaited, but his troublesome ways stayed with him stride for stride.

In his first professional fight against Mike Tomlinson, which he won with a kimura submission, everyone noticed that Lee Murray hardly used his left hand. He later revealed that he had broken his hand in two places after a bar fight the night before. He went to the hospital after he had won his fight.

Murray would amass a professional record of 8-2-1 (one No Contest) that included a narrow defeat to Anderson Silva, whom many consider the greatest P4P fighter in the history of the sport. He then got his shot on the biggest stage of all, the UFC. He won, defeating Jorge Rivera with a triangle choke. It was his proudest moment. Had he been able to stay out of trouble there was no measure for how high his ceiling could have been.

Legendary American coach and former UFC Welterweight Champion, Pat Miletich, said that if Lee Murray had focused only on his fighting, there’s no way he wouldn’t have become a world champion, but it wasn’t to be. Murray’s visa was revoked after he committed an assault on a driver that sideswiped him.
He would get another chance in a smaller promotion in England called Cage Rage. But surprise surprise, Murray was stabbed at an English supermodel’s birthday party, so he couldn’t fight from the resulting injuries. Finally, it was time for Lee Murray to retire.

Lee Murray became legendary after his heist of a Securitas Bank that was one of the more well-planned and executed robberies of all time. Growing up in tough projects with a lot of problems, he was a man that had the making of a criminal mind all along. However, he did leave his mark in the ring also. He went the distance with Anderson Silva and submitted Jorge Rivera in the UFC. He may well have been a champ if not for his insatiable greed and need for that adrenaline and cash.

Murray now resides in a mansion in Morocco. Fleeing from extradition to Great Britain, he was arrested by Moroccan police for cocaine possession. Murray was released after eight months in jail and a 27 thousand euro fine. This is not a big deal for Lee as he feels he is untouchable in Morocco since he is a citizen and Morocco is not known for extraditing its citizens under any circumstances.

Thank you for taking the time to read my blog, I hope you enjoyed it and found it informative. You can find my work here at TarpsOffSports.com and follow me on Twitter @Gaberkatora. To check out all the other great Tarps Off Sports content, head on over to our YouTube channel. Please contact me if you have any questions or comments. We are an interactive sports site that takes pride in interacting with our readers. 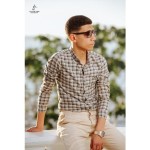